After somewhat of a lull in cetacean activity in the mid Celtic Sea region, things started hotting up (literally!) as we approached the southern reaches of the Irish offshore territory and into UK and French waters. The sea surface temperature peaked at around 18°C and the ocean sunfish were out in force, as were common dolphins, with several groups seen every day ensuring the marine mammal observers were kept busy. We also recorded several breaching tuna, which looked to be bluefin and albacore. Our hoped for leatherback turtles didn't materialise however.

The outermost survey transect lines brought us close to or just over the continental shelf edge, an area of high productivity where several fin whales and even a single striped dolphin were noted. While surveying near the shelf edge along the northern end of the Bay of Biscay one evening, we spotted two very tall blows out towards the horizon line on our starboard side, presumably from fin whales. Soon after, another group of three fin whales crossed the path of the ship ahead of us from port to starboard, offering fantastic views.

Hard to beat good looks at the second largest animal on earth!

Fin whale (c) John Power
(you can just about make out the white colour to the right-hand side of the lower jaw in this pic, a diagnostic ID feature for the species)

We had some really nice sightings of bottlenose dolphins too, both near the shelf edge and also over the shallower shelf waters. Each group seemed to give the ship a wide berth, travelling past at distance. We tried to take as many pics as possible to see if we can match them to any known group (bottlenose dolphins with distinctive notches, scars and colourations on their dorsal fins are catalogued across Europe). It would be great to find out which group these animals belong, 'offshore' or 'coastal'? 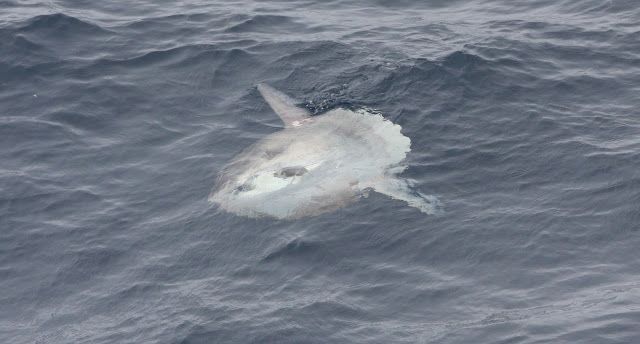 
Sightings of cool marine wildlife have not just been limited to daylight hours. While on transect lines, the ship stops on station at night from midnight to 4am as part of the method for surveying boarfish. During this time a whole manner of life is attracted to the waters around the ship, illuminated by the lights. Fish such as saury start appearing in their droves to feed on gathering plankton which in turn attract predatory species like garfish, blue sharks, common dolphins and even seabirds such as fulmars and European storm-petrels (plus a grey phalarope one night circling the ship, calling!).

This nocturnal wildlife spectacle has provided the night shift scientists and crew with endless entertainment (the blue sharks stealing the show, hands down). Even some of us day shift observers had to stay up way past our bed time in order to witness it! 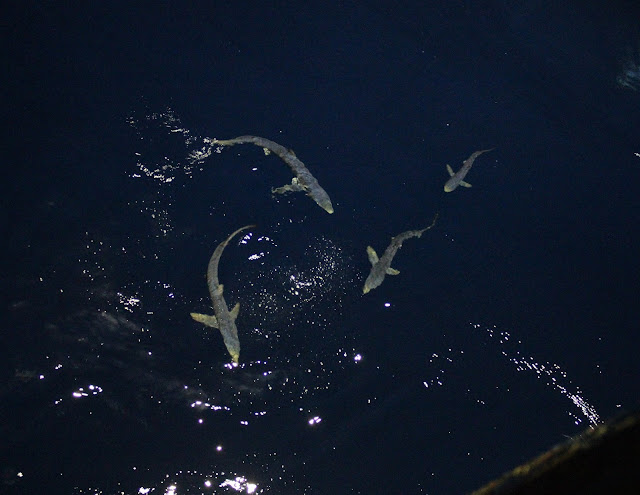 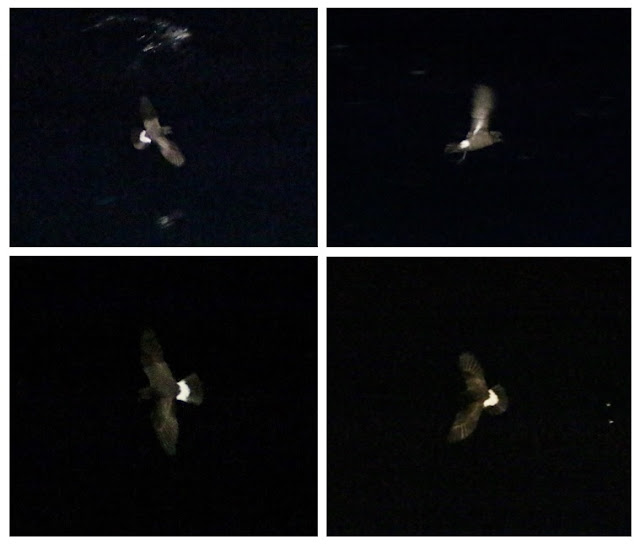 The seabird list finished up on a total of 26 species with the latest additions being Barolo shearwater, grey phalarope and yellow-legged gull.

Barolo shearwater (which breeds on Atlantic islands such as the Canaries) was a real highlight as it is a rarely observed species around Irish and UK waters but more often seen in the Bay of Biscay, so the bird we saw travelling north with a Manx shearwater just inside the UK offshore territory some 270km southwest of Scilly was perhaps just about on the edge of its perceived regular range, although it seems we have a lot more to learn about their occurrence closer to home as this tracking study has shown.

A flock of 17 grey phalaropes was flushed ahead of the ship on the evening with lots of fin whale activity near the shelf edge along the north side of the Bay of Biscay. These pelagic waders (which feed on zooplankton) will already be on their way south to wintering grounds off the west coast of Africa. On examining pics of the flock, it appeared that quite a few females were present. Grey phalaropes breed in the High Arctic, where the males incubate the eggs and safeguard the chicks during the breeding season while the females leave soon after the eggs have been laid so it is not surprising that we have seen a flock of mostly females this far south already. Their work is done!

A quick check of the gull flock following the ship while west of Brittany yesterday afternoon produced a single fresh juvenile yellow-legged gull, as expected, but enjoyed immensely by the gull enthusiasts on board (...enthusiast, to be precise!).

Otherwise, the past week for the seabird team has been spent soaking up excellent views of yet more Cory's shearwaters and great shearwaters, a very good showing of European storm-petrels and some long-tailed skuas. A few more Wilson's storm-petrels were also seen, bringing the tally for the trip up to 13 individuals. 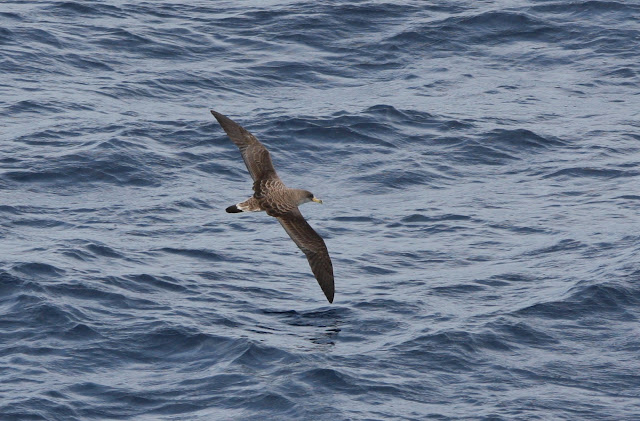 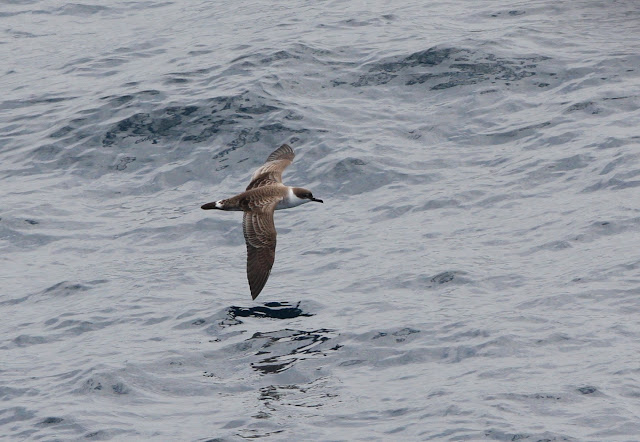 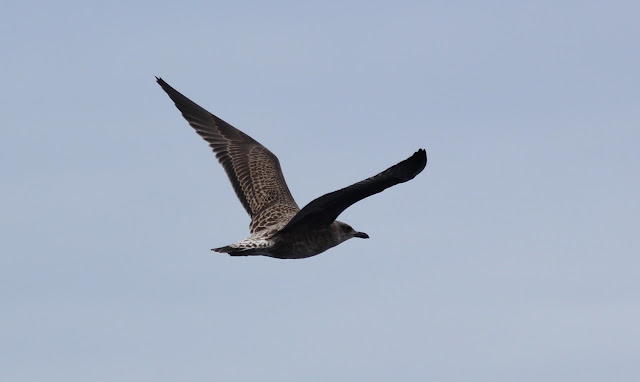 After 25 days at sea, the Western European Shelf Pelagic Acoustic Survey (WESPAS) has come to an end. We are docking in Falmouth in Cornwall this morning from where we will make our way home to Ireland, giving us plenty of time to reflect on the fantastic marine species which we have had the privilege of seeing over the past few weeks. From here the RV Celtic Explorer will make its way to Germany to  undertake another survey.

We'll finish up with a pic of the final species list for the survey and a heartfelt thanks to Chief Scientists Ciaran O'Donnell and Graham Johnston (Marine Institute) for their continued support of offshore marine mammal and seabird surveys and to the officers and crew of RV Celtic Explorer for all their valued assistance throughout the cruise. Until next time... 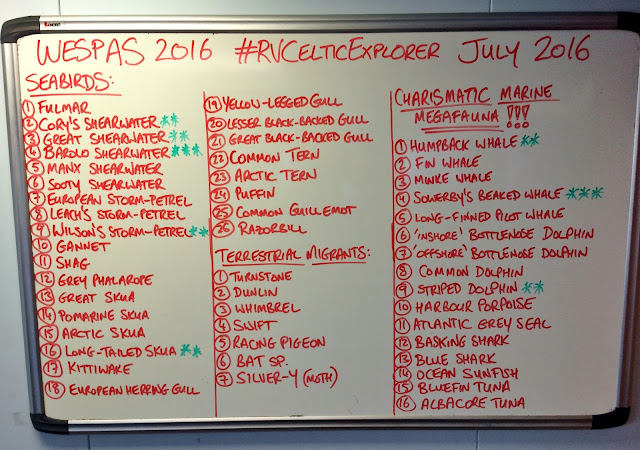 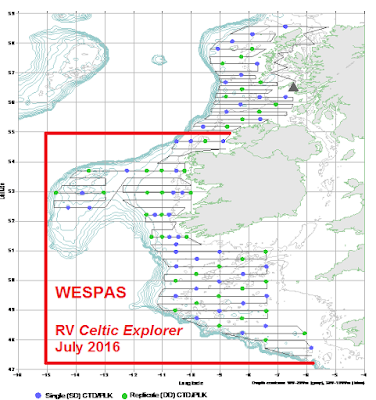