A low pressure system swept up from the southwest and across our tracklines over the Porcupine Bank through Saturday evening and the first half of Sunday, making conditions unsuitable for on deck surveys. We still powered on by watching from inside the bridge of RV Celtic Explorer until a break in the weather and reduction in swell height allowed us back out once more on Sunday evening.

Choppy seas with cresting waves and large white caps are not ideal for detecting cetaceans but true to form, a couple of groups of long-finned pilot whales came in close to the ship for a look-see, meaning our efforts didn't draw a blank. Pilot whales are often the only species you can count on seeing on such rough days. 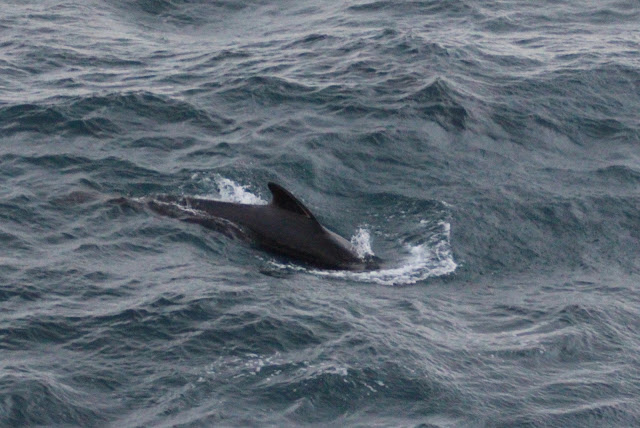 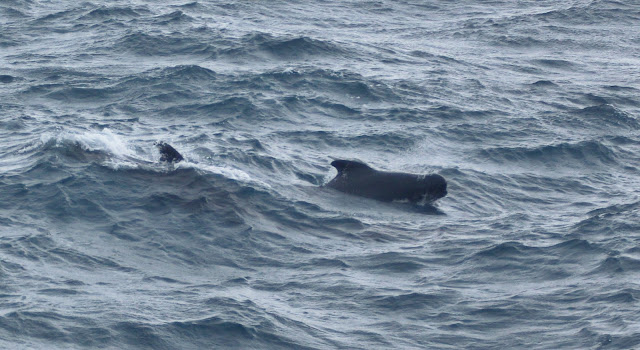 Through Sunday evening and Monday, we steamed over the steeper western slopes of the Porcupine Bank in order to retrieve three Static Acoustic Monitoring (SAM) devices deployed here in March to record cetacean vocalisations (more on this in an upcoming blog post). The route between each of the SAM sites brought us over some great habitat which didn't disappoint.

Conditions were much improved at this stage and allowed us to spot the blow of a large baleen whale dead ahead at about 3km range. As we got closer and closer it became clear that it was a fin whale, the second largest animal on earth (only blue whale is larger). Fin whale is the most abundant large whale in Irish waters so we were expecting to record this species soon enough but still always a pleasure seeing them! 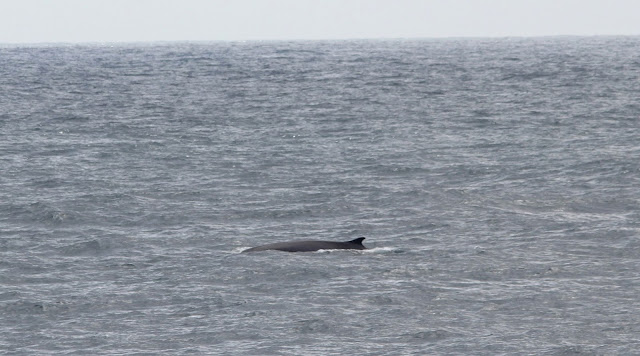 On Monday evening we were treated to an amazing flurry of activity as we headed up and over the shelf edge from deep to shallow waters. While over the 600m contour line we started picking up several small groups of pilot whales and common dolphins in loose association making their way past the ship. It soon became apparent that these were part of an overall widespread aggregation which was topped off by a sighting of 10 or so striped dolphins in full corkscrew-style breaching mode!

Striped dolphins are typically associated with warmer sub-tropical waters, being common in the Bay of Biscay and Mediterranean Sea but less frequently recorded in Irish waters and usually in the deeper parts of the southwest section of our offshore territory in the summer/autumn. That being said, members of the current survey team were out here in March during the Blue Whiting Acoustic Survey on RV Celtic Explorer and recorded striped dolphins in much the same area. Perhaps there is more to learn about their occurrence here yet. 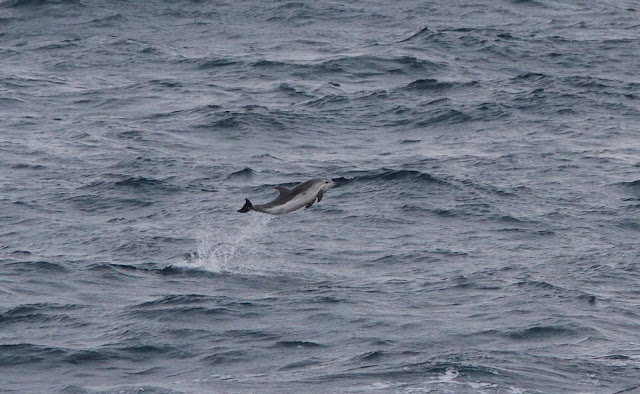 The highlight of the past couple of days relates to two sightings of animals from the poorly understood group known as beaked whales. These cetaceans live in deep offshore waters where they favour underwater canyons and seamounts as foraging grounds, searching for squid. They are deep diving specialists, small, sleek and not often observed at the surface, especially from large ships. Identification of beaked whales at sea is fraught with uncertainty and good photographs of the head are often required to check for the diagnostic positioning of erupting teeth along the lower jaw on males in particular.

We had good views of a group of three animals surfacing on multiple occasions alongside the ship at 250m range on Sunday evening, well enough to see the heads of the two adult type animals (the third was a smaller juvenile). The views of the head shape and overall colouration of the animals would suggest that Sowerby's beaked whale was the species in question. These are thought to be the most abundant Mesoplodon beaked whales in Irish waters but there is still a lot to learn here.

We were inside the bridge when we spotted the group of three beaked whales so between the ensuing excitement (...panic!) and the fact that we were looking through glass windows, the only pics we managed to get were very much of a 'for the record' quality but we are still chuffed with the sighting!

On Monday afternoon we encountered a Mesoplodon type beaked whale which breached fully out of the water four times in a row, albeit at a distance of about 700m. No matter how many times you get to see beaked whales (if you're that lucky), they always leave you wanting more! 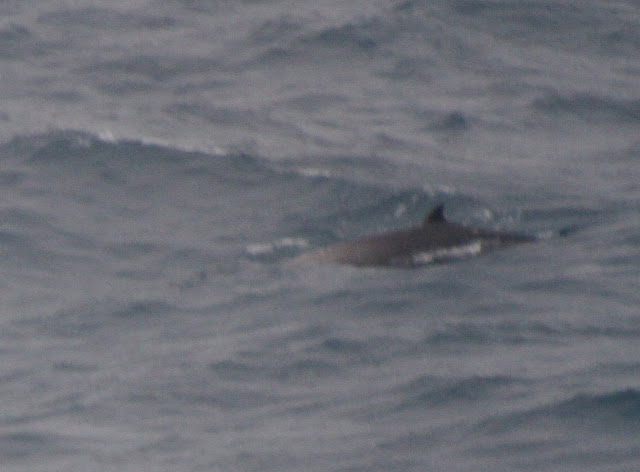 Monday ended with a respectable total of 18 sightings of cetaceans logged for the day.

We said goodbye to the Porcupine Bank this morning but not before we encountered yet more long-finned pilot whales and a small group of offshore bottlenose dolphins (a new species for the survey list).

Now making our way towards the next set of transect lines closer inshore off the west coast, common dolphins following us as we go. 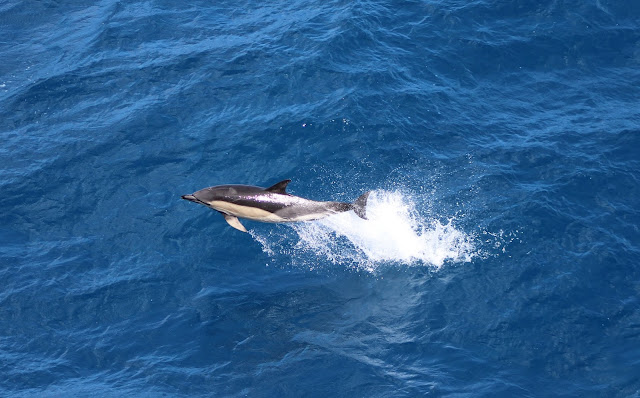 The seabird team have had a less hectic time of it with low numbers of birds present along the western side of the Porcupine Bank, which has been a bit of a surprise given the time of year that is in it. The inclement weather may have had something to do with it as the low pressure which advanced from the southwest while we were out there could have moved birds on to another area ahead of us.

As an example of how quiet it was, the seabird team set a new personal record of a full 90 blank minutes between sightings of different individual birds during a survey period on one of the days! A record they hope ever to break again!

In other news, the first migrant landbird of the survey was seen yesterday in the form of a turnstone which circled the ship some 300km offshore. It was presumably heading south for the autumn from breeding grounds in Greenland (yes... for some birds autumn has begun!). 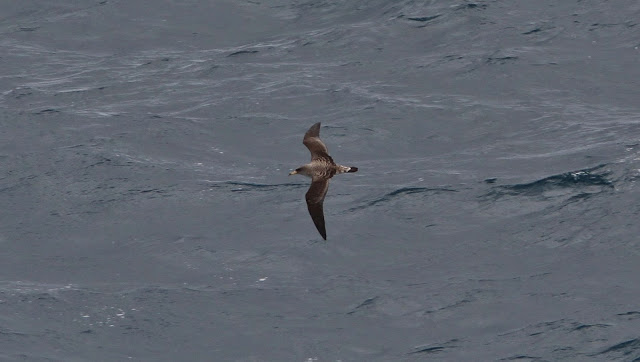 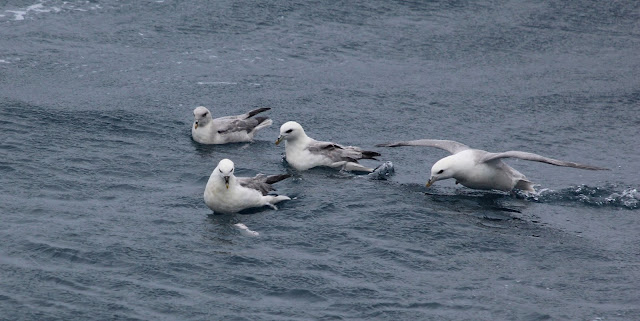 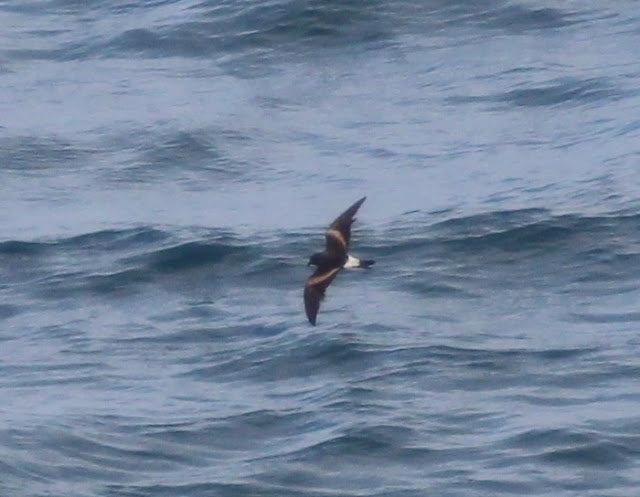