COTF6 Day 6: It Ain't Over Until The Fat Turtle Sings

As we make our way into Galway Bay to dock tonight, it's time to look back on yet another superb days surveying on board the R.V. Celtic Explorer in the waters off West Ireland.

It was both a busy night and day for the acoustic monitoring teams with the hydrophone picking up plenty of common dolphin whistles as well as some lively vocalisations from long-finned pilot whales.

Our starting point over the Hovland Mound SAC at the North end of the Porcupine Seabight remained quiet enough for the first hour or so before large numbers of common dolphins with several calves started making their way towards the bow. During all this commotion, a separate group of 30 or so very active dolphins some distance ahead of the ship caught our attention. With behaviour and a breaching style suggestive of striped dolphin we decided to break track and investigate. A mixed group of both common dolphins and at least three striped dolphins then appeared on our port bow, showing incredibly well, allowing for some excellent photo opportunities (closer examination of which reveals 'foetal folds' also known as 'birth rings' on one of the striped dolphins, indicating its young age). It was a real treat to get such good views of this infrequently encountered species in Irish waters after our brief run in with them earlier in the week. 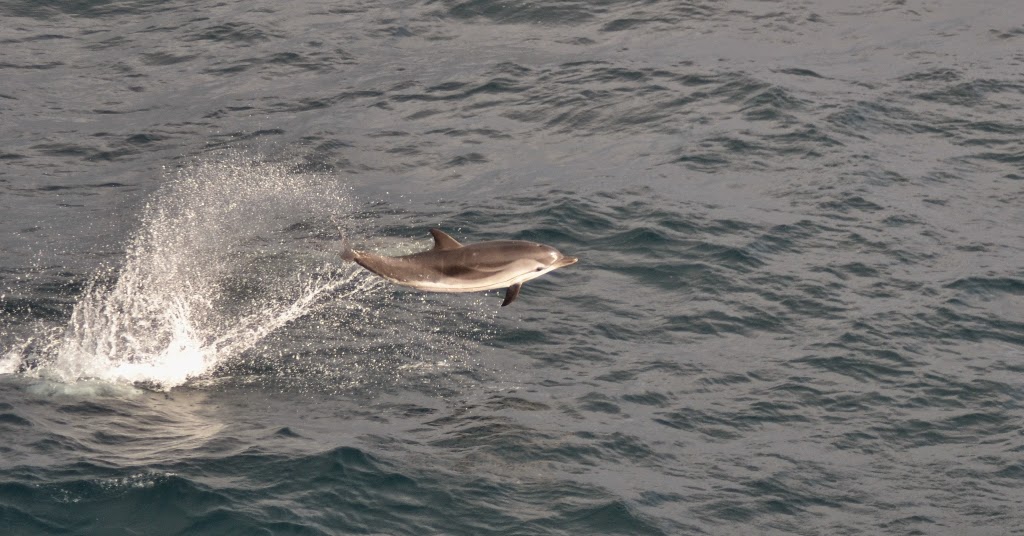 Striped Dolphin. Just look at how it bursts out of the water! (c) Jason McGuirk 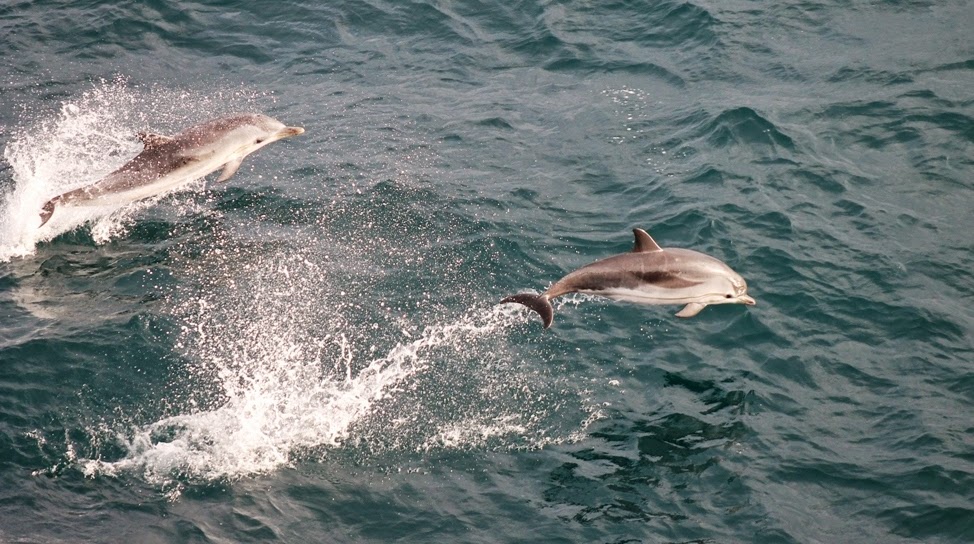 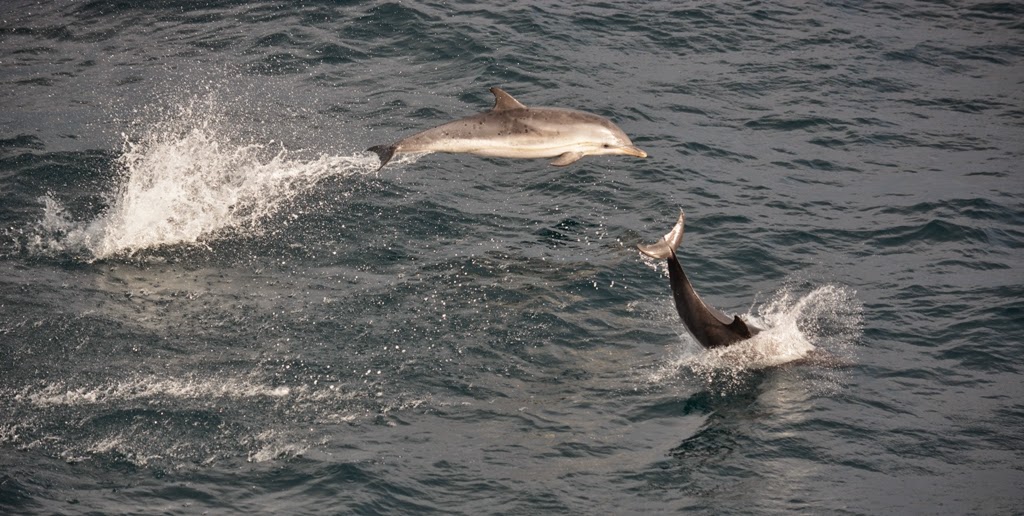 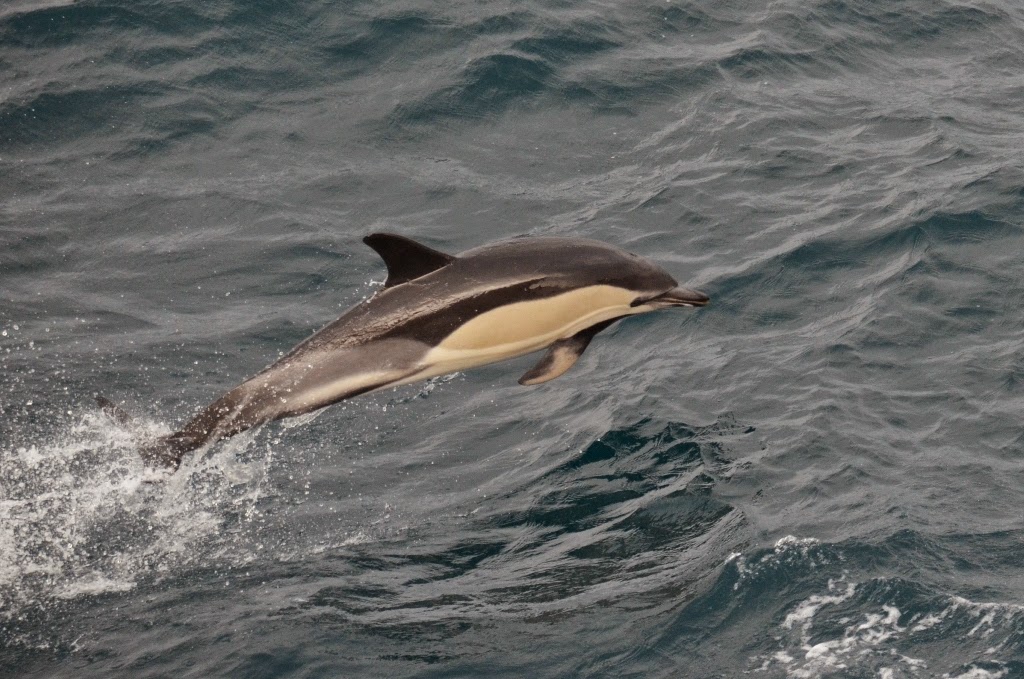 Later in the afternoon, a large sized and active group of common dolphins had with it an entourage of milling seabirds, namely sooty shearwaters, gannets, European storm-petrels and a circling pomarine skua. All indications of a mixed species feeding association on the go, the birds perhaps availing of fish pushed to the surface by the dolphins? Whilst scanning through the flocks of seabirds, that unmistakable shape of a leatherback turtle, complete with its ridged carapace and prehistoric looking head, came looming out of the water among them not more than 100 metres from the ship. A stunning view of an ancient and gnarly animal. Magic! 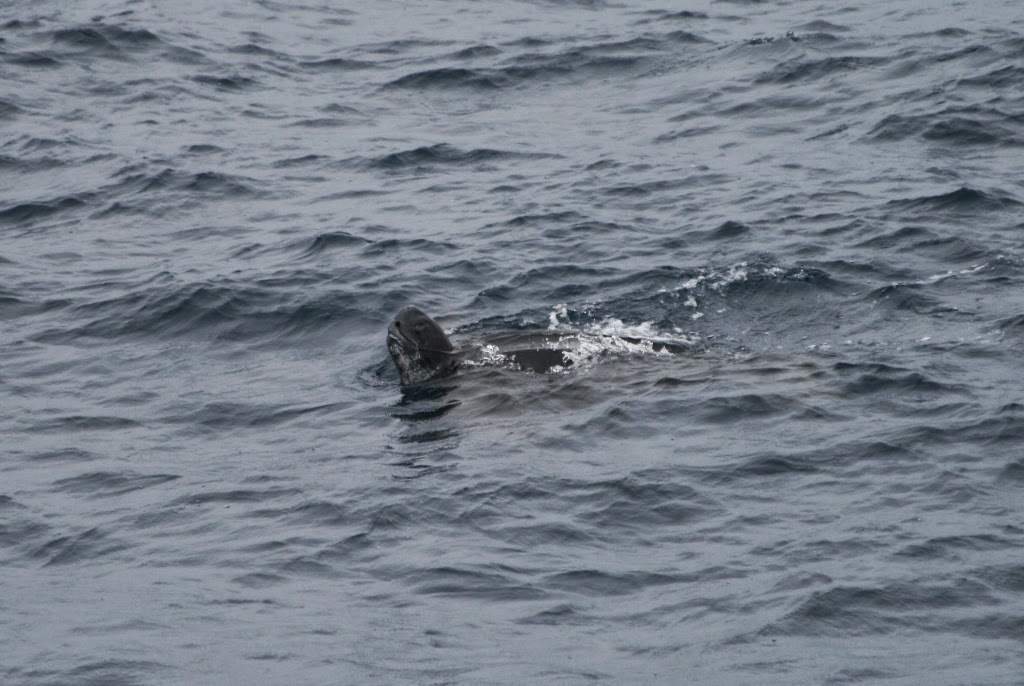 Aside from the aforementioned leatherback turtle, more marine ‘megafauna’ was recorded again today such as a large ocean sunfish with lesser black-backed gulls in attendance (perhaps picking parasites off it?) and half a dozen or so albacore tuna breaching close to the ship. 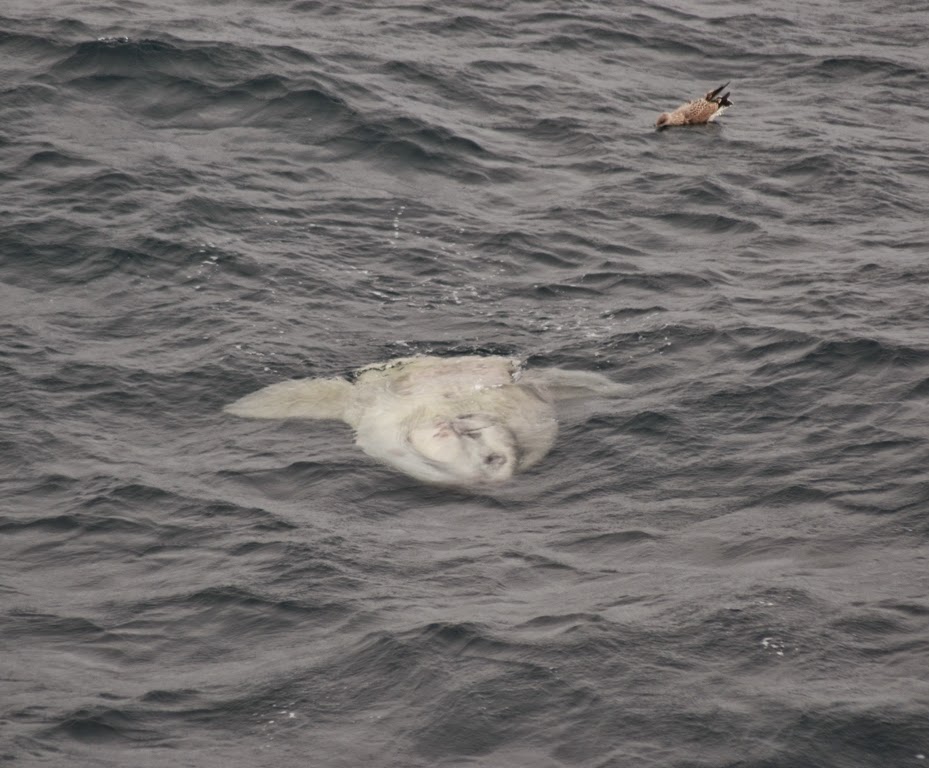 Seabirds were generally low in number yet again but the patch of feeding activity associated with the common dolphins and leatherback turtle in the afternoon certainly bumped up some figures. A Wilson’s storm-petrel showed well first thing this morning as it passed by close to our port side. A total of four very fine adult pomarine skuas complete with ‘spoons’ (i.e. their uniquely shaped tail streamers) flew right over the observation deck. New species added to the trip list today included a puffin, a black-headed gull and numerous great black-backed gulls. Other tallies in the form of a great shearwater, 20 sooty shearwaters, 19 Manx shearwaters, 58 European storm-petrels and 7 great skuas were noteworthy. 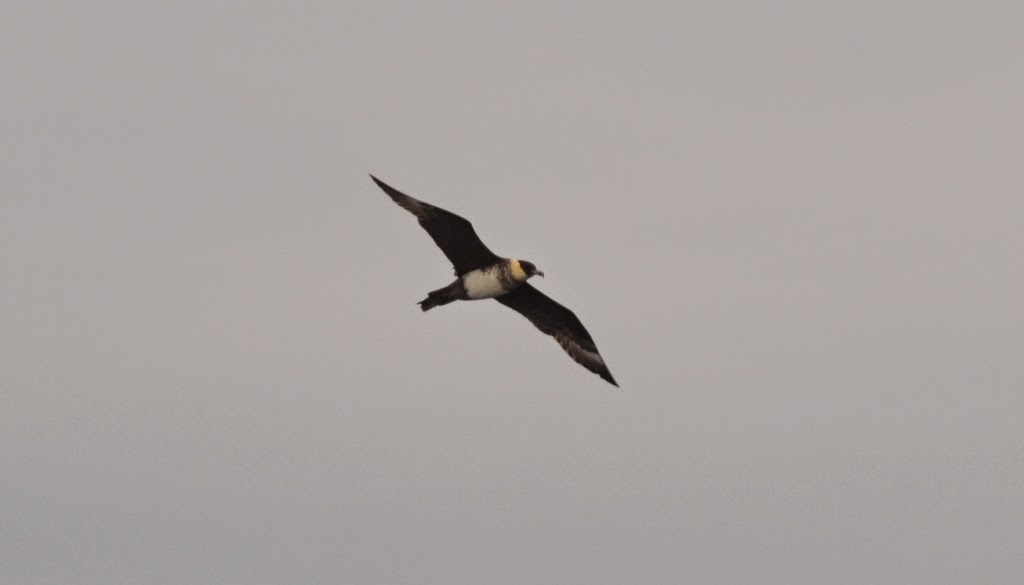 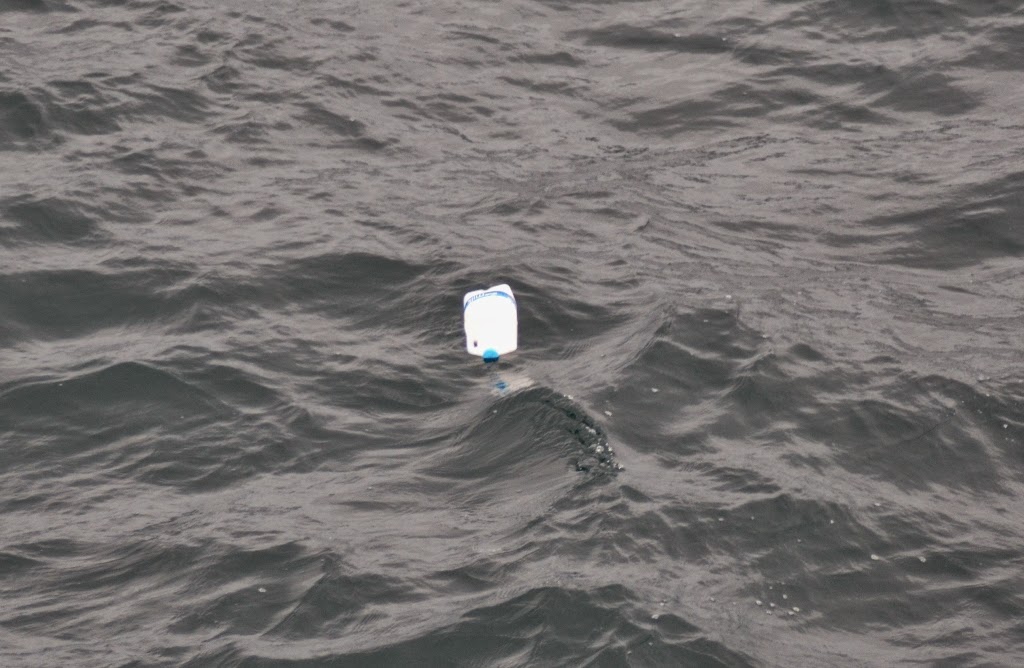 In the final minutes of survey time for the seabird team, a totally unexpected migrant songbird landed on the railings just 1 metre beside the observers... a nightingale! The bird took flight and made its way out to sea before coming back and landing in the rescue boat on the deck! It then flitted about from here to there for about 10 minutes or so, not looking very settled at all, before flying back out to sea, never to be seen again. This all occurred some 40 nautical miles West of Loop Head, Co. Clare. Nightingales are a very rare passage migrant to Ireland with just 30 or so documented records to date. An amazing send off at the end of the trip! Additional new migrant birds on the R.V. Celtic Explorer included a merlin, a blackcap and a lone swallow which was seen circling the crow’s nest. 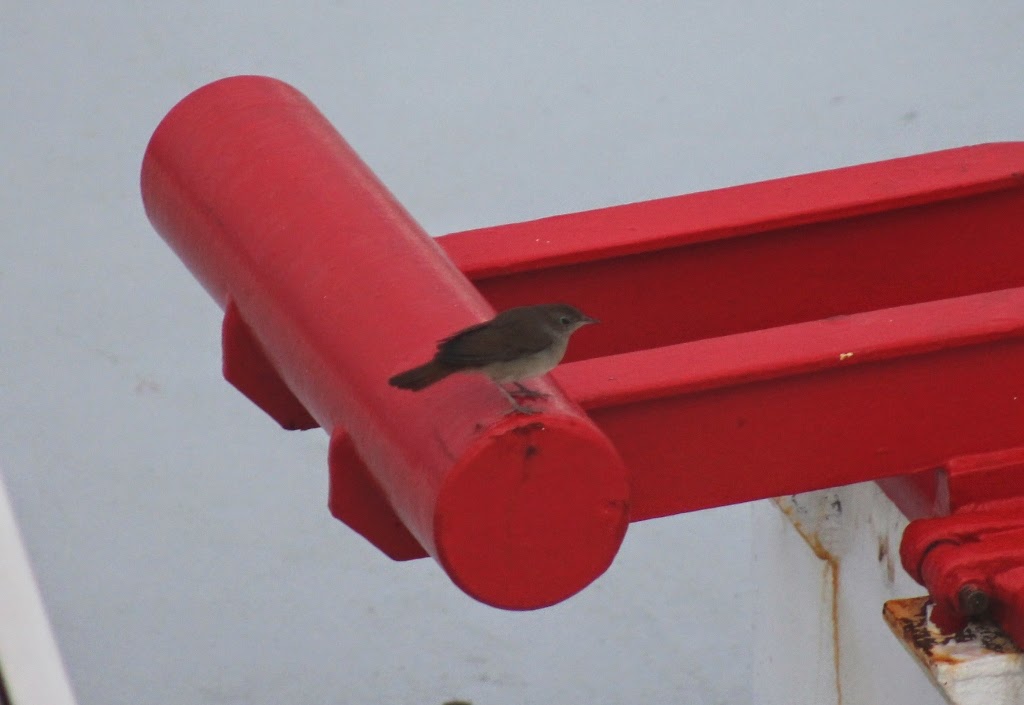 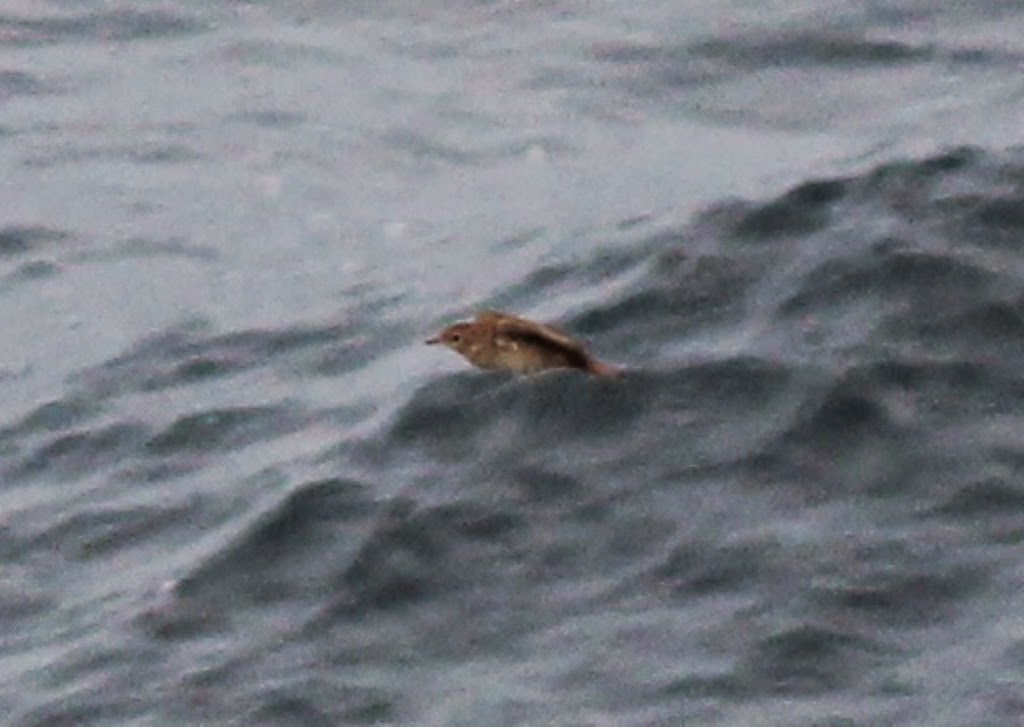 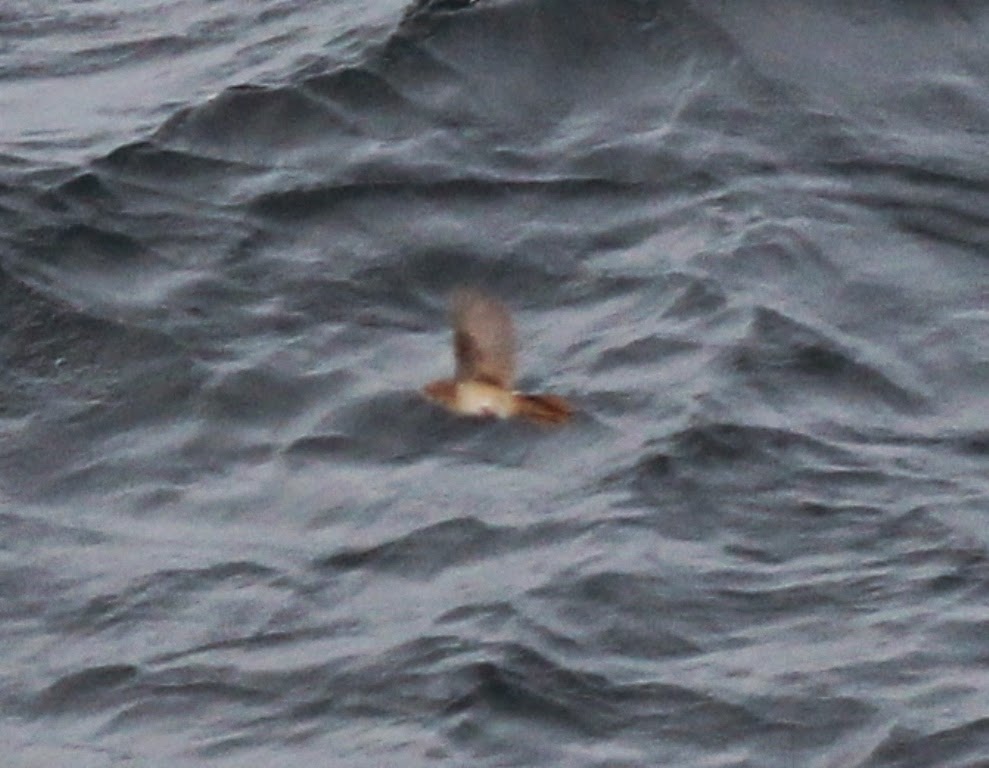 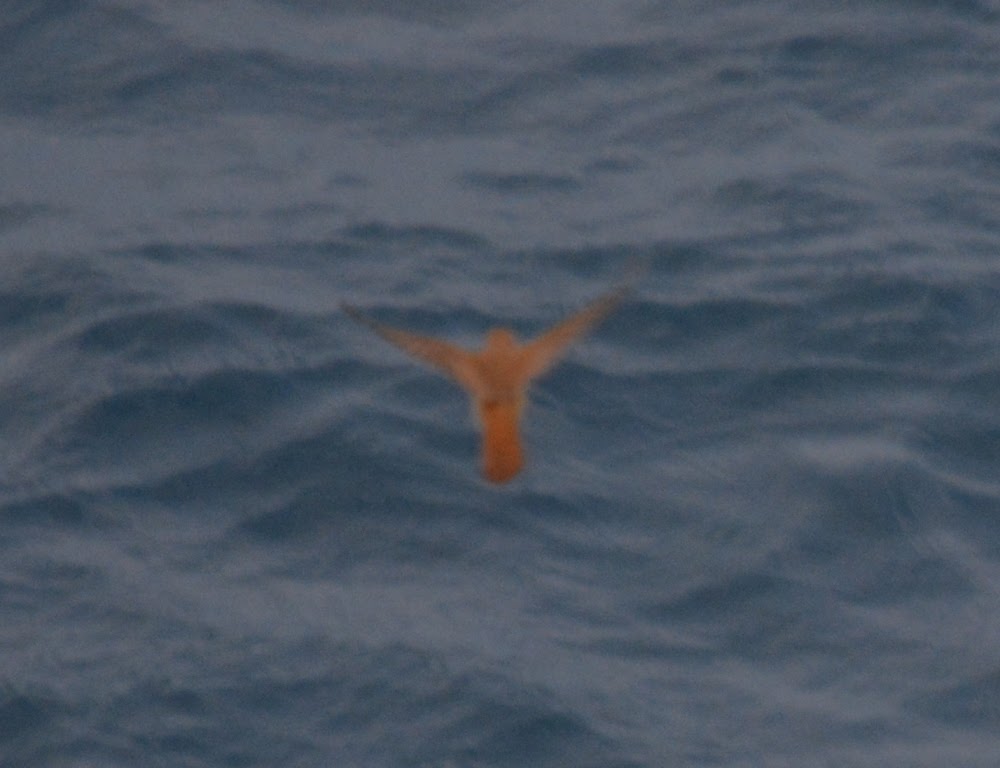 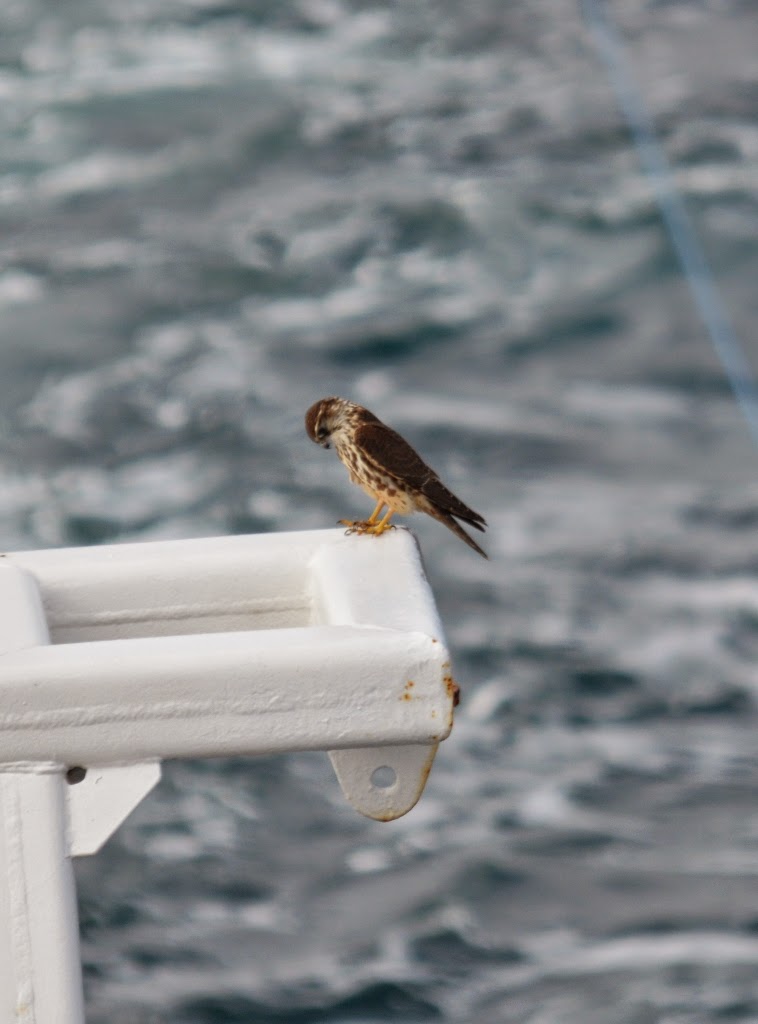 News of our killer whale sighting from a few days ago seems to have been a popular story with the media, receiving coverage in the national papers, radio and TV. Here's an article on the subject on BreakingNews.ie for those interested.
Posted by COTF Survey at 23:30