A special blog post this evening on account a particularly special day spent with one of the most recognisable seabirds in the North Atlantic, the gannet.

Surveying over the Celtic Deep, some 50 nautical miles south of Wexford, we came across an area of fishing activity with several trawlers in operation which attracted the attention of an impressive number of seabirds, most notably gannets, of which thousands and thousands were to be seen here, there and everywhere!

At one stage early this morning, our survey trackline took us right through the middle of a resting flock numbering some 5,000 birds which made for quite the sight when they started parting either side of us and taking flight. Several hundred began following RV Celtic Explorer allowing for truly amazing eye level views of these stunners as they cruised alongside, making use of the updrafts created by the headwind deflecting off the starboard side of the ship.

Visiting the breeding seabird cliffs at Great Saltee in Co. Wexford for the first time at the age of eight will always remain on of the key moments in my ‘seabirding’ career. Seeing, hearing and smelling the gannet colony there will be etched into my senses forever. Since then I’ve spent many hundreds of hours surveying gannets at breeding colonies, migration watch points and from ships, during which time it can be all too easy to become complacent and have them turn into an endless stream of ‘white blobs’ to count for the sake of counting. Today it was a pleasure to take some time off and simply watch them, re-igniting my fascination as they effortlessly tracked the ship often just metres away.

It’s difficult to convey the sheer magnitude of today’s events in a series of pictures, but hopefully the following will give you some idea of what it was like… 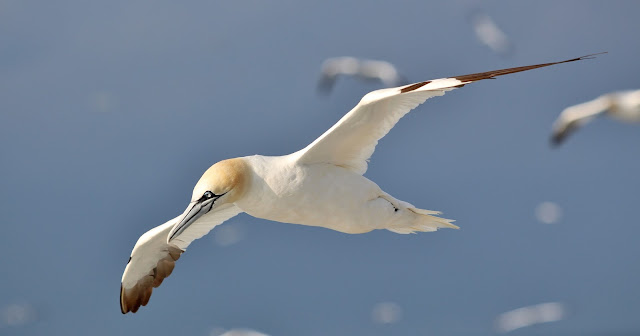 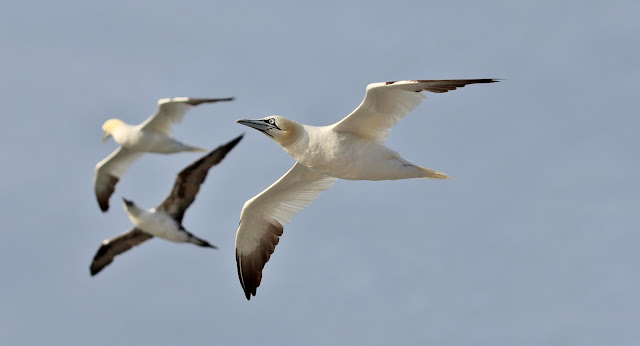 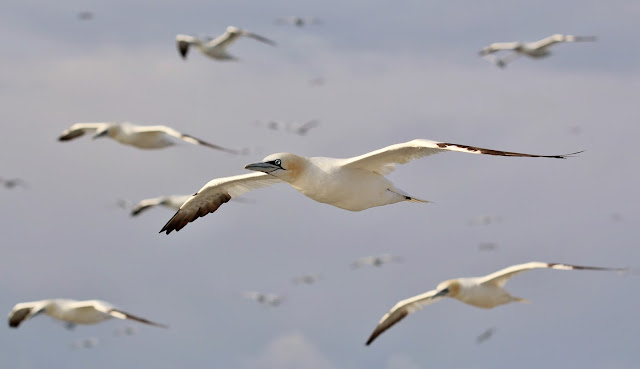 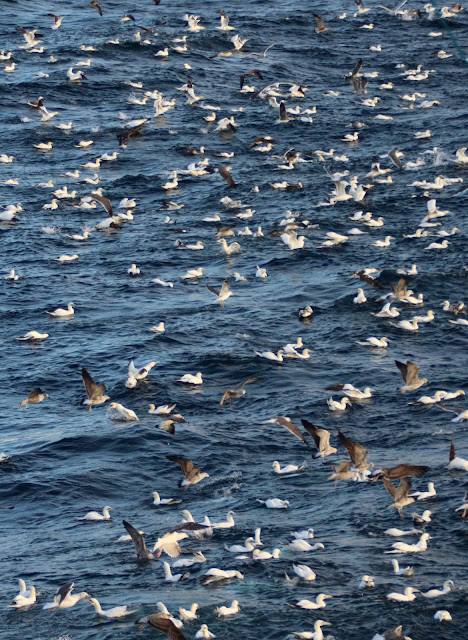 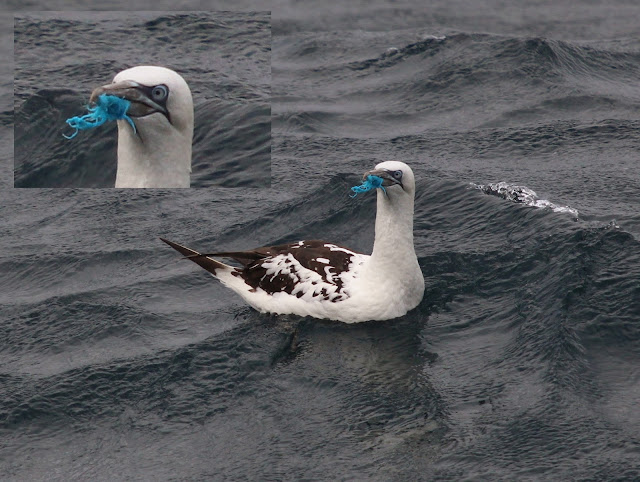 Brightly coloured rope is often used by gannets in courtship displays and also to adorne their nests which can lead to entanglement, usually around the legs but this one had some wrapped around the lower mandible. (c) Niall T. Keogh 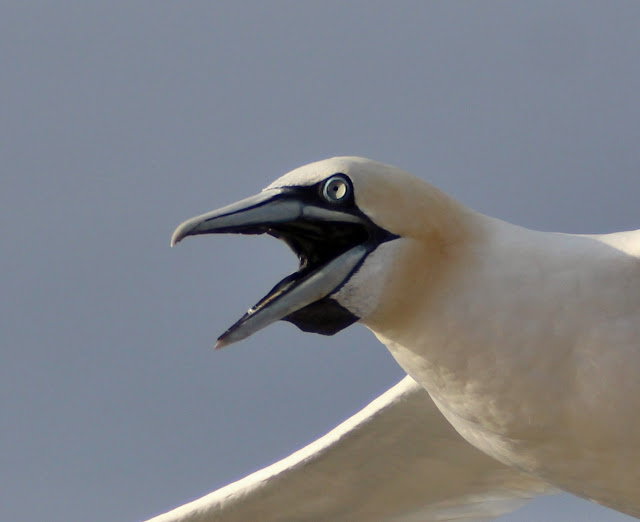 Check out the dewlap on this gannet! (c) Niall T. Keogh 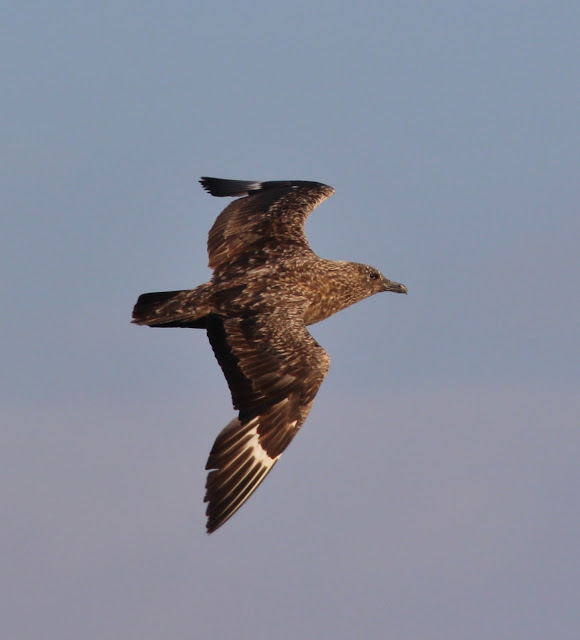 The RV Celtic Explorer seabird team weren't the only ones keeping a close eye on all the gannet action today. Up to 100 great skuas (Bonxies) were seen among the flocks, waiting for the opportune moment to strike! (c) Niall T. Keogh 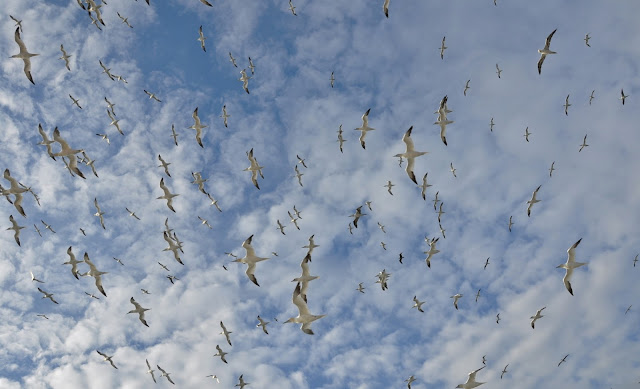 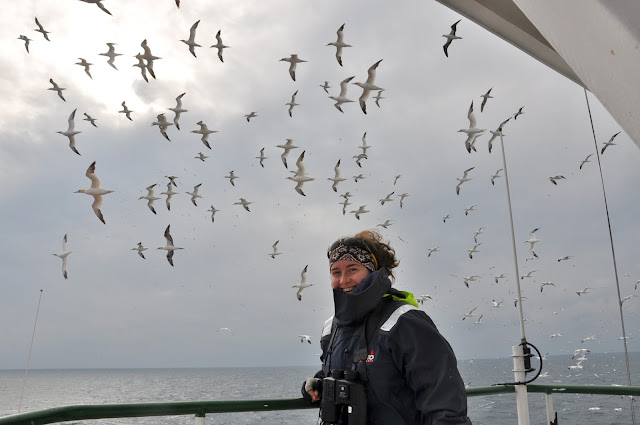 
It is also worth mentioning that with so many large, sated seabirds flying close overheard for the day, some ‘faecal impact’ was inevitable and I’m glad to report that Gary was the lucky recipient. Here he is looking delighted with himself prior to the delivery of gannet guano… 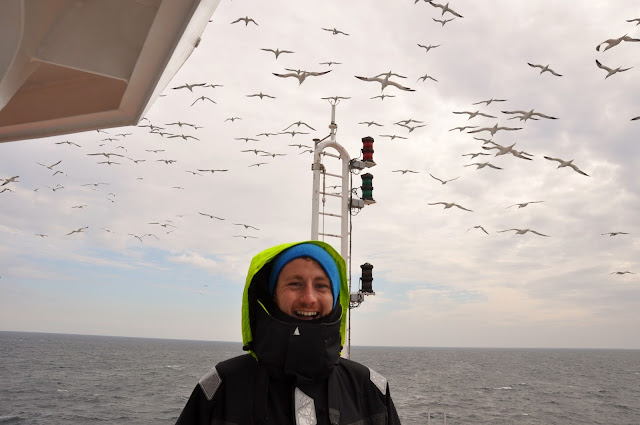