The day began some 60 nautical miles West of Dursey Island where the ships crew were hard at work, loading the M6 weather buoy on to the deck. It had come free of its mooring and began drifting Eastwards a result of the storms and massive swells experienced of late (e.g. a record breaking 23.4m wave was recorded by the M4 buoy off Donegal on Sunday - pretty much sums up the weather we've been having this winter!). Once it was tethered, hoisted and strapped down onto the deck by the always efficient and professional crew of the R.V. Celtic Explorer we were back on track, steaming North along the edge of the Porcupine Seabight from 9am, over a water depth of 700-500m. Hopes were high as previous surveying in the area has shown that this is an exciting place to be! 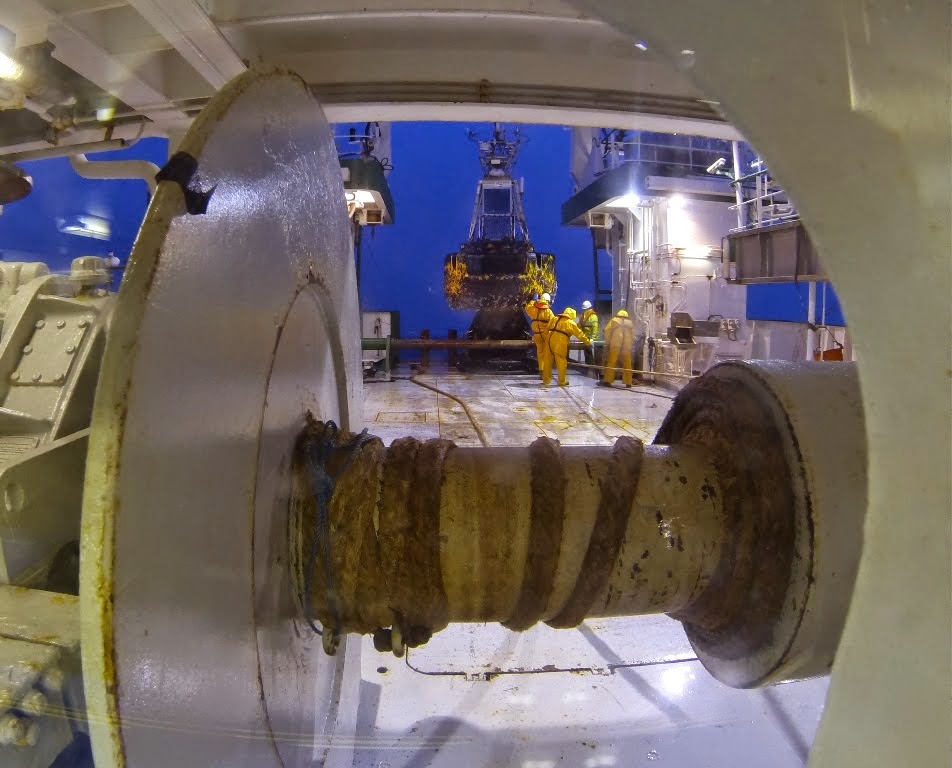 This is certainly the realm of the fulmar, with approximately 300-500 birds milling around in our wake for much of the morning, making a mockery of the high seas, cruising about in loose squadrons, seemingly right at home in the deep troughs. Our entourage also included plenty of kittiwakes and gannets, some great black-backed gulls and a single herring gull plus some bonuses in the form of a single great skua, 3 glaucous gulls (an adult and two 1st-winters) and at least 6 'blue' fulmars (5 L's & 1 D for those familiar with the plumage scoring system). 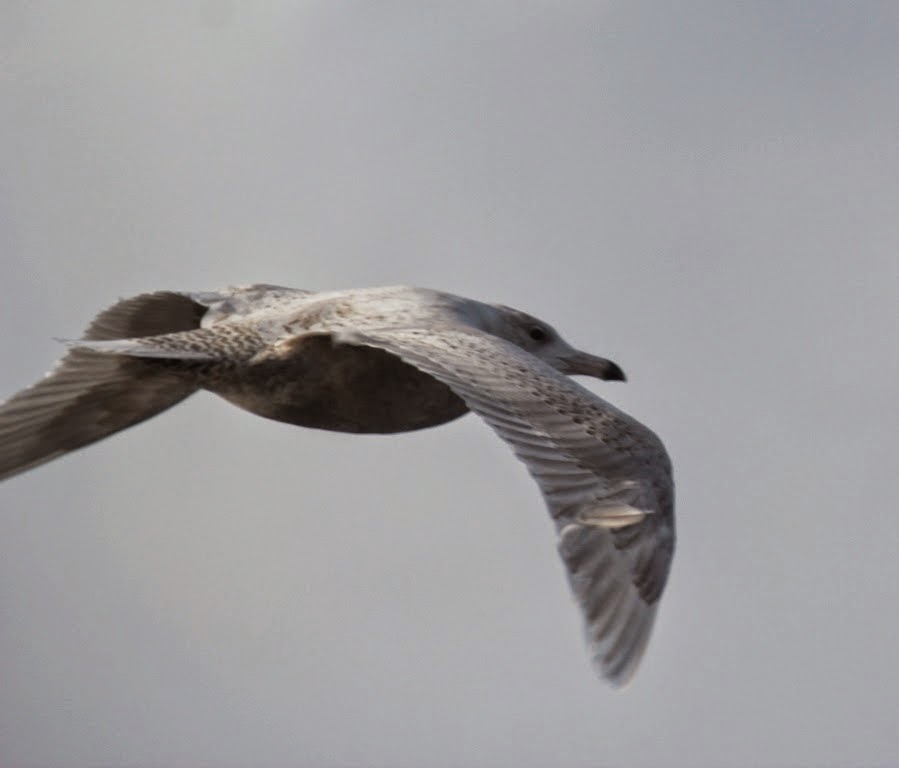 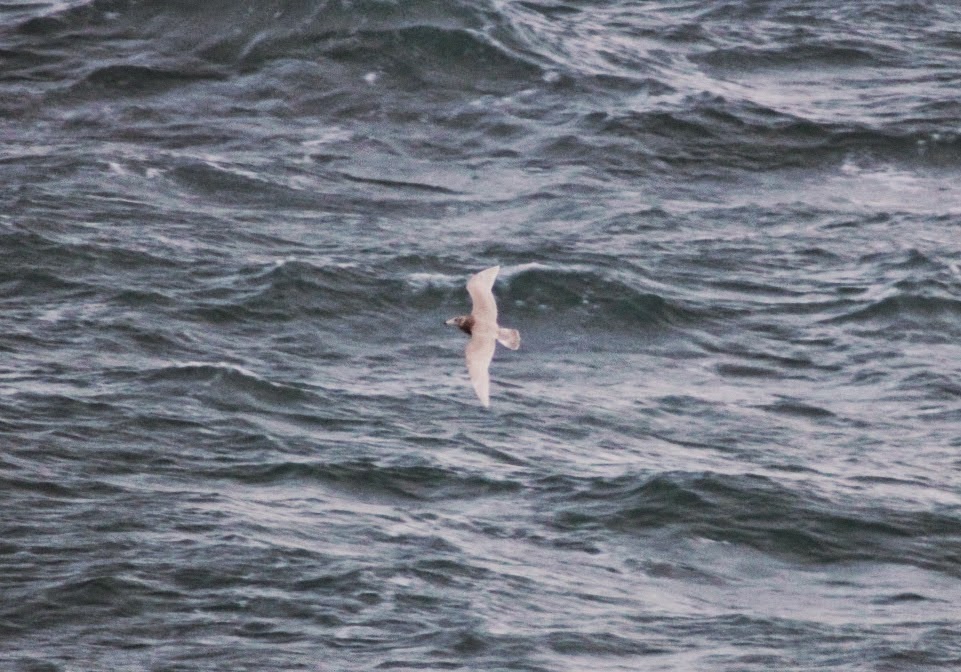 The sea state was certainly on the higher end of the scale for surveying (up to 7 or 8 at times!) and a large swell made searching for cetaceans difficult. Some whistles were picked up by the hydrophone, sounding like bottlenose dolphins (no doubt of the enigmatic 'offshore ecotype' this far out to sea) but the icing on the cake came in the form of a group of 9 long-finned pilot whales picked up by one of our MMO's, Catherine O'Sullivan, about 50 nautical miles West of the Blaskets just as the evening was drawing to a close.

The group, which consisted of 2 large-sized adults, 4 regular-sized adults/immatures, 2 juveniles and a small calf came straight in for our bow and spent a good 20-25 minutes circling the ship, having a good look at us, and allowing us to have a good look at them! Such is the inquisitive nature of these superb 'blackfish' (a family of dark coloured medium sized cetaceans, including killer whales, which are in fact dolphins).

The "Atlas of the Distribution and Relative Abundance of Marine Mammals in Irish Offshore Waters: 2005 – 2011" recently published by IWDG has shown that pilot whales are relatively abundant and well distributed in Irish offshore waters but strongly associated with shelf slope or deep water habitats and as such they are only very rarely ever seen from land. So while they may indeed be 'common' for want of a better word, it was still a real privilege to spend some time with these fantastic animals this evening. It wouldn't have been a proper Cetaceans on the Frontier survey without them! 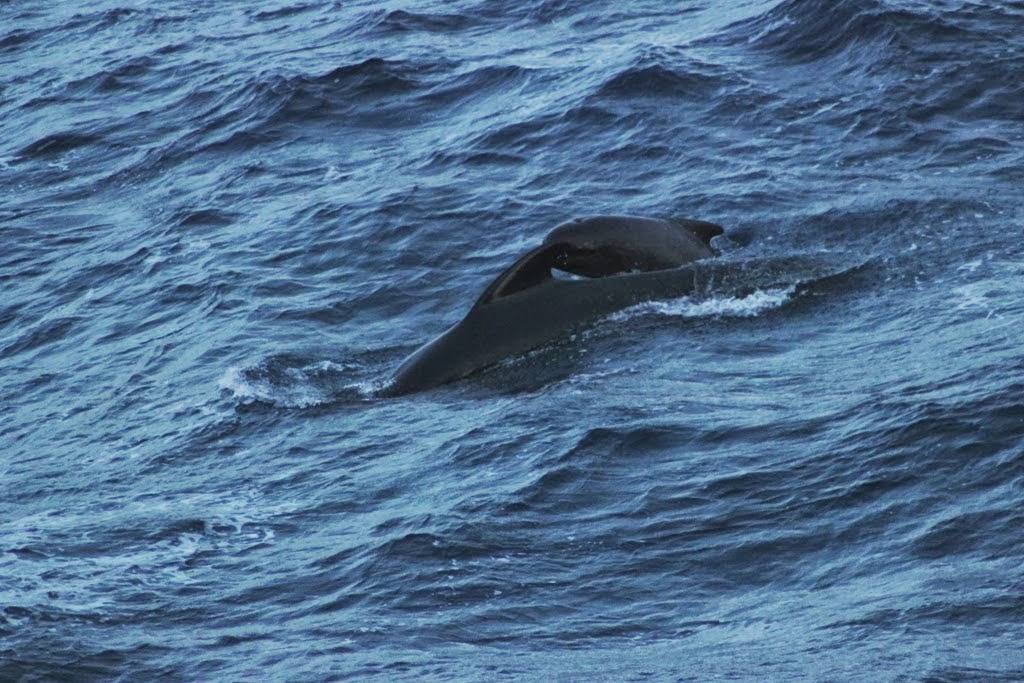 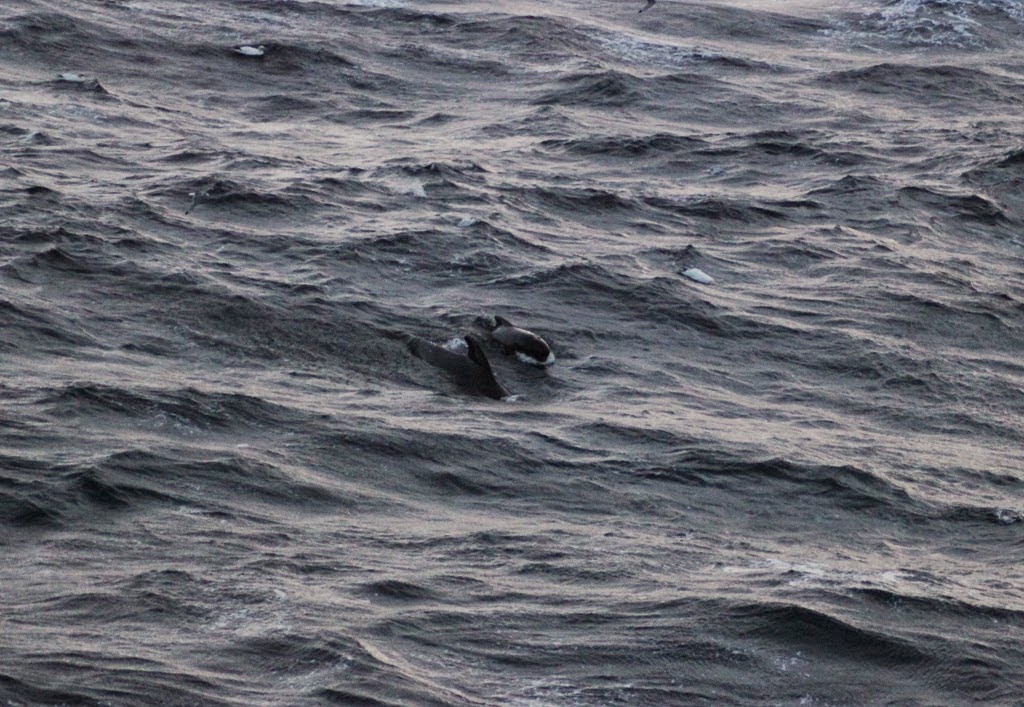 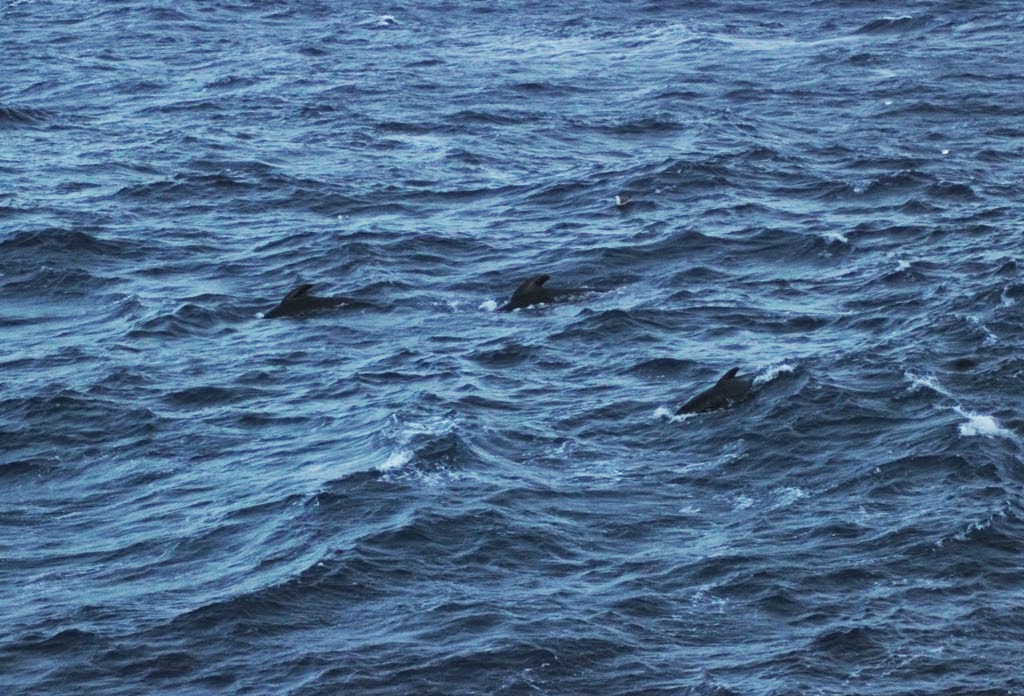 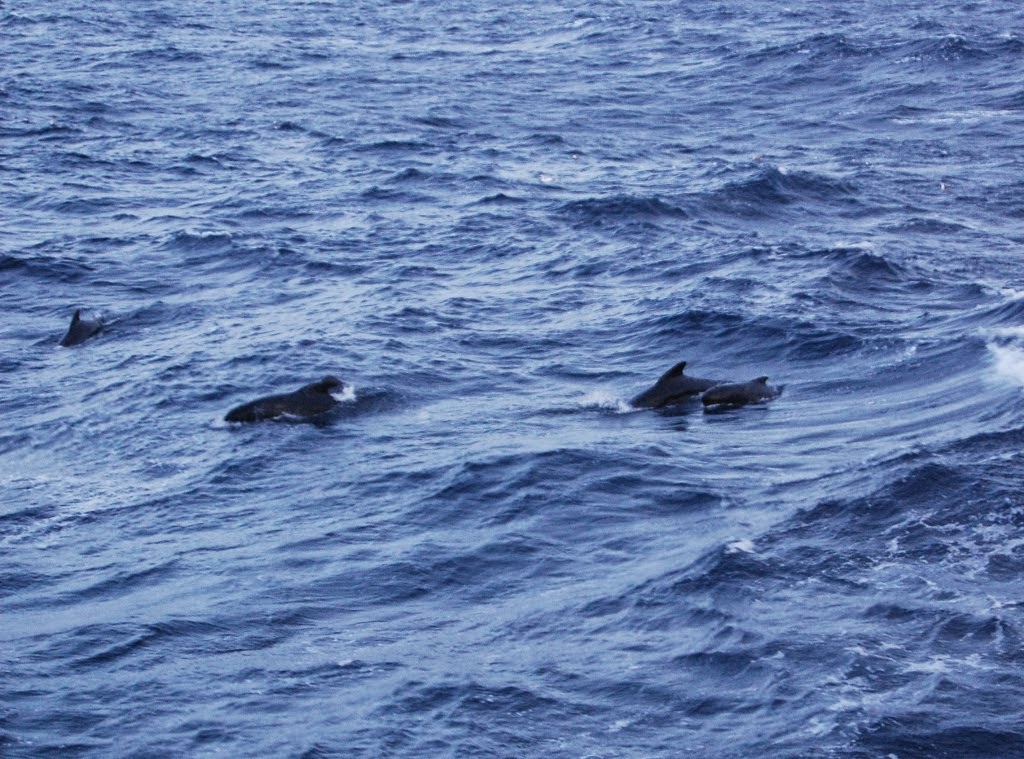 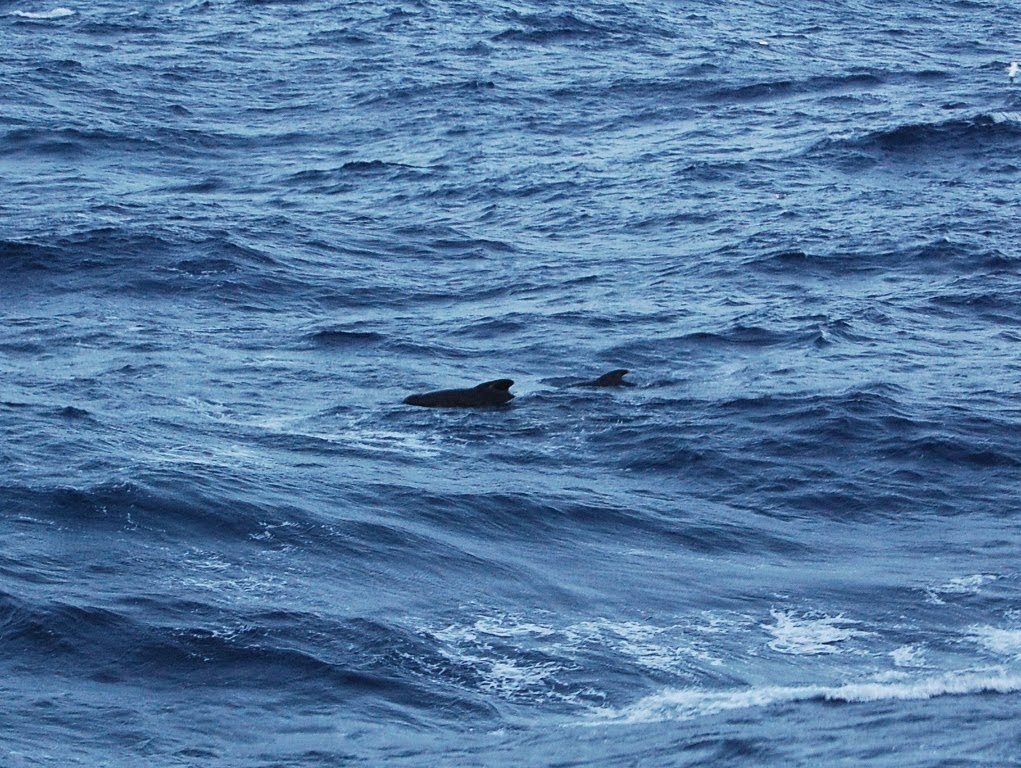