Our Sunday morning transects started some 30 nautical miles south of Hook Head, Co. Wexford. This was the second day of our inshore survey and final day of recording for the expedition overall. We targeted major headlands between Hook Head and Roche's Point at the mouth of Cork Harbour. During this survey the cetacean team recorded a single large baleen whale sp. (likely a Fin Whale) very close to shore south-west of Tramore, several groups of Common Dolphins, 2 Harbour Porpoises, as well as one sighting of four of the resident Bottlenose Dolphins in the mouth of Cork Harbour.

The seabird team had sightings of typical inshore species not seen during the offshore leg of the expedition such as Great Black-backed Gull, Herring Gull, Common Gull, Red-Throated Diver, Shag, Cormorant, Razorbill & Guillemot. Other birds of note included a Manx Shearwater & a 'Blue' Fulmar.

Strong North-westerly winds coming off the mainland made observations difficult at times for both teams. On Saturday night the zooplankton team completed 2 stations but unfortunately didn't connect with the hoped for barrel jellyfish off Rosslare. 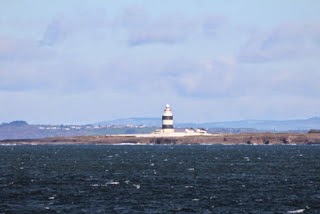 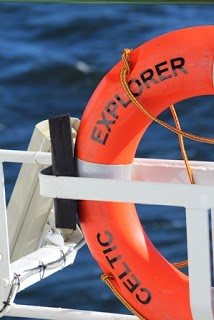 The R.V. Celtic Explorer made her way into Cork Harbour at 18:45 on Sunday evening. The Cetaceans on the Frontier III Survey achieved more than anyone could have hoped for. All three teams collected extremely valuable data which will provide a solid baseline for future monitoring.

I wish to thank everyone for their support during our expedition. I would also like to especially thank the crew of the R.V. Celtic Explorer for making all of the scientists feel at home and for assisting us in this successful research expedition. To my fellow researchers, it was an absolute pleasure meeting and working with you. I hope to see you all again next year for Cetaceans on the Frontier Expedition IV! 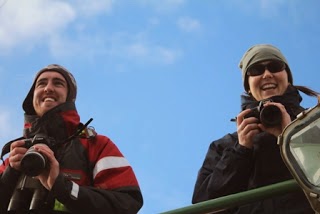 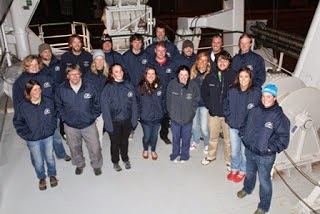 The Cetaceans on the Frontier 3 research team (c) Lilian Lieber

~ For the Cetaceans on the Frontier III Survey this is Teresa Martin signing off. ~

The Cetaceans on the Frontier III survey was supported under the Marine Institutes’ competitive ship-time scheme, funded through the Marine Research Sub-programme of the National Development Plan 2007–2013, as part of the Sea Change strategy.