The survey team for BWAS 2017 met on RV Celtic Explorer in Galway Docks the day after St. Patrick's Day, heading out into Galway Bay that evening. The next day was mostly spent just off Black Head where the fisheries team from the Marine Institute made use of the calm bay waters to calibrate their acoustic survey equipment. The seabird team took this opportunity to go through survey techniques and identification training, with eleven species seen including Great Northern Diver, Black Guillemot and Common Gull (inshore species which we are unlikely to see while offshore). No sign of any marine mammals there however. We set sail that evening and made our way towards the start of the transect lines over the southern end of the Porcupine Bank.

The mix of habitats around the Porcupine Bank include the relative shallows over the bank itself, bordered by continental shelf edge slope and deep abyssal waters beyond, making the region one of the most diverse areas for marine life in the Irish offshore territory. Unfortunately for us, Monday right through to Thursday afternoon was spent battling into the teeth of a northerly gale in this area! As such, the potential for sightings was limited.

We surveyed from inside the ship's bridge during this time, which made staring out at the (gusting) Storm Force 10 winds, hail and 6m swell somewhat bearable but reduced our chances of seeing much. Just one sighting of marine mammals occurred during these first few days, a group of seven Common Dolphins (including a calf) which came straight in to our bow in rough seas. PAM was more active however with plenty of dolphin whistles and Pilot Whale vocalisations picked up by the hydrophone. 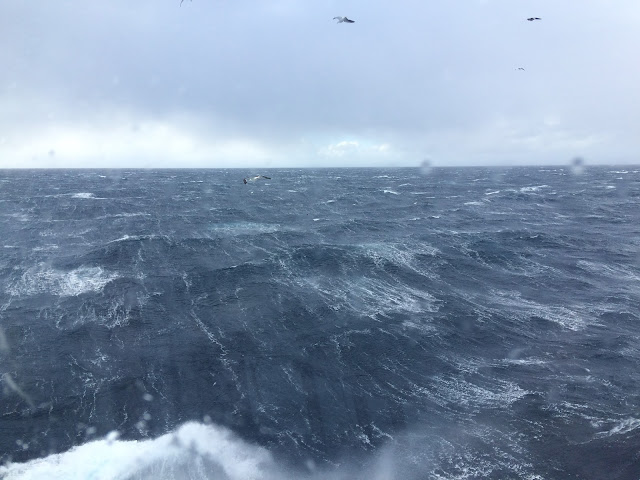 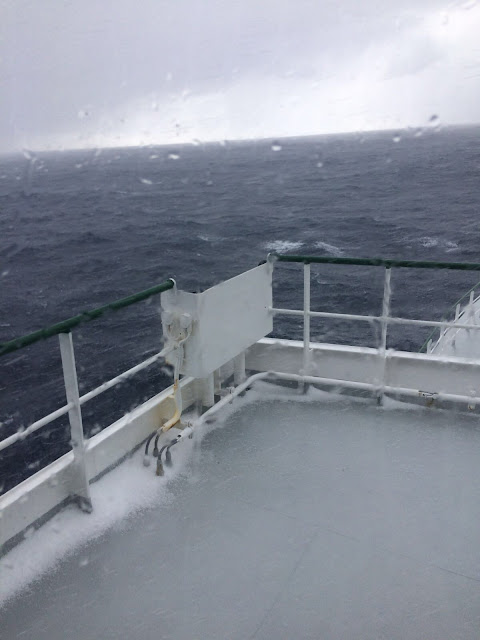 Hail building up on the deck! (c) Niall T. Keogh

A break in the weather finally came through on Thursday afternoon, when the low pressure made its way south and we cleared through it to calmer seas over the shallow waters of the bank. Our determination during the previous few days was rewarded that evening by a couple of sightings of a distant large baleen whale. Views were had of the blow only but more than likely this was a fin whale. 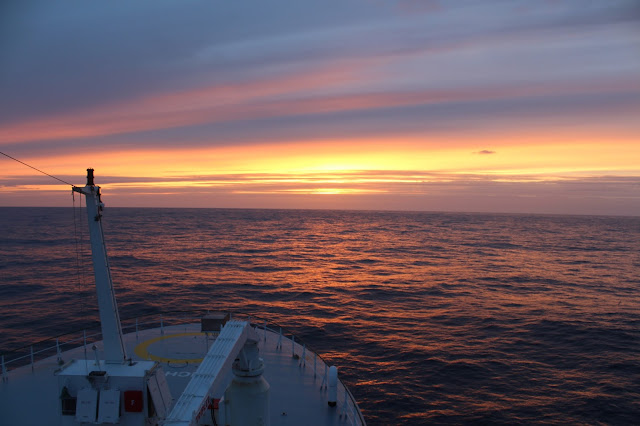 Friday saw us surveying over deep waters (1500m or so) to the north west of the bank with calm seas and bright, clear conditions on our side. Within the first 15 minutes of the morning watch, our MMO in the crow's nest spotted two Sperm Whale blows about 2km dead ahead of the ship! We had a few more sightings of them as they made their way past us, heading south at about 1km range a little later. Not long after, the seabird team picked up a group of five or so Long-finned Pilot Whales coming in to investigate the ship but they cleared off soon after, just a few record pics taken to document their occurrence. It was great to finally see these two expected (but welcome!), deep water species.

A further sighting of a whale blow (likely another Sperm Whale), a single Common dolphin and detections of dolphin whistles and sperm whale clicks on PAM rounded off the first good day of survey for us. 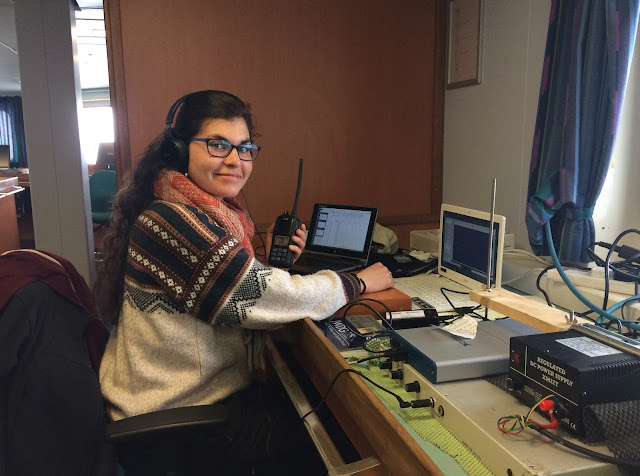 
The seabird team had plenty to look at during the rough weather but this mostly involved birds which were following the ship, riding along in the updrafts and presumably hoping we would stop to go fishing at some stage. Gannets, Kittiwakes, Fulmars, Great Black-backed Gulls and Lesser Black-backed Gulls made up the bulk of seabirds in attendance while a scattering of Great Skuas, Sooty Shearwaters and a single Glaucous Gull added interest as did some Manx Shearwaters doing their own thing, heading past us further out at sea. Once the calm weather took hold, we were able to see a few Puffins here and there in between the waves and swell. 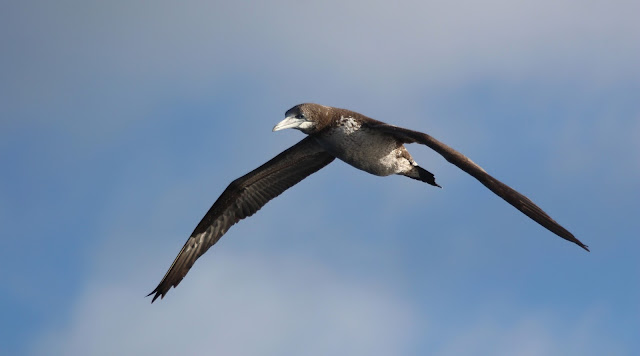 Gannet / Alcatraz / Fou de Bassan
Nearly all the Gannets we see out here are pristine white adult birds or near-adults. It was nice therefore to see this younger bird (a 2nd calendar-year) which certainly stood out from the crowd! (c) Niall T. Keogh 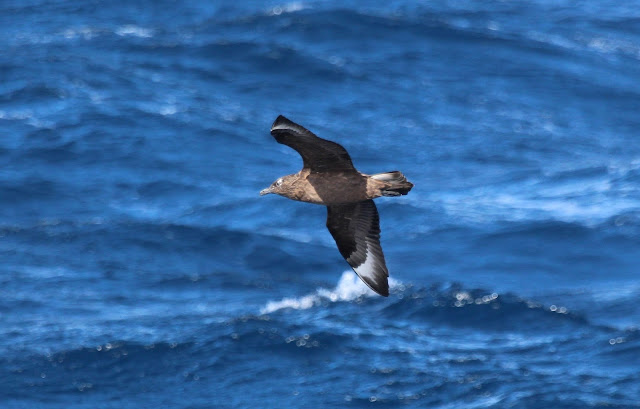 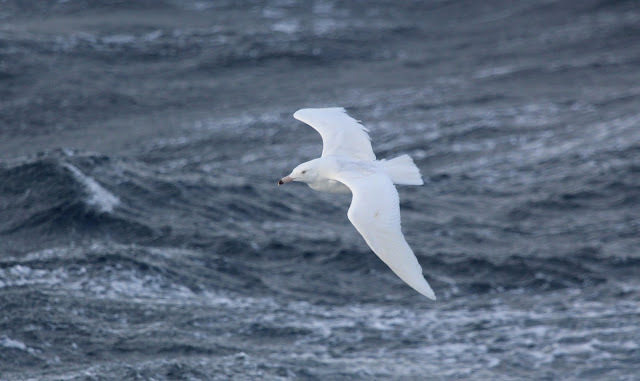 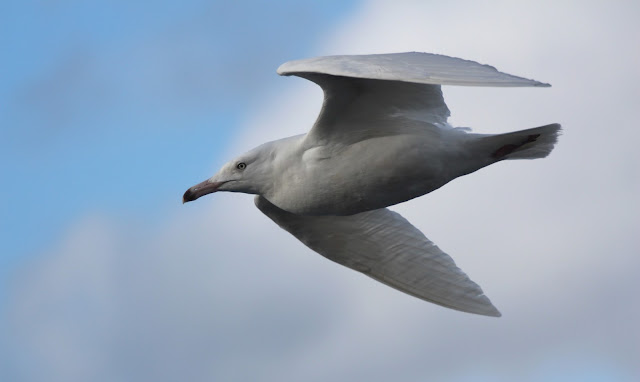