COTF4: Calls from the Deep

In addition to visual survey effort for whales and dolphins we are also towing a 200m hydrophone behind the ship. Whales and dolphins live in an underwater world where sound allows them to communicate with each other, to find their prey and to navigate. Some species of whales spend much of their lives in the deep ocean with little or no light to see by, yet these whales use sound to ‘see’, producing clicks or sound pulses which bounce off prey and their surroundings, allowing them to hunt and to navigate in much the same way as bats do on land.

Our hydrophone (basically an underwater microphone) detects sound over a wide frequency range from the very low Hertz (below the human range of hearing) up to 150 kilohertz (way above the human range of hearing). We humans can hear in the 14 hertz to 18 kilohertz range so this means we can hear dolphin whistles (which lie below 20kHz), sperm whale clicks (100 Hz to 32 kHz) and the lower frequencies of dolphin clicks (which generally peak at 40-60kHz). We cannot hear the higer frequencies of dolphin clicks and we cannot hear porpoise clicks (which peak at 120-150 kHz) at all!

However we can see these high frequency clicks using a computer and some software which turns noise into images via a spectrogram readout and a click detector. On the 26th January we detected some porpoise clicks to the west of the Aran Islands (see image below), with the clicks having a peak frequency of about 140kHz. These animals were also detected visually by the observers. So far we have made acoustic detections of harbour porpoise, common dolphin, bottlenose dolphin, pilot whale and sperm whale. As we track our way northwest we are keeping an ear on the seas for more calls from the deep… 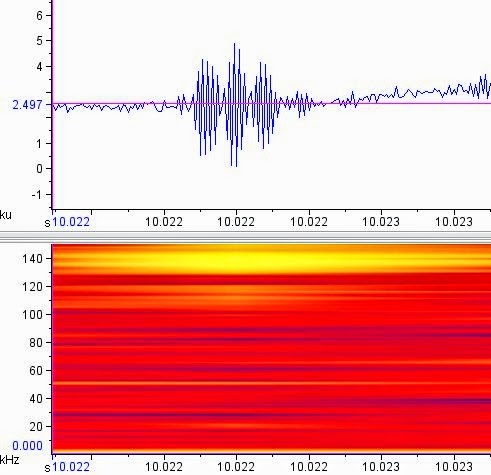 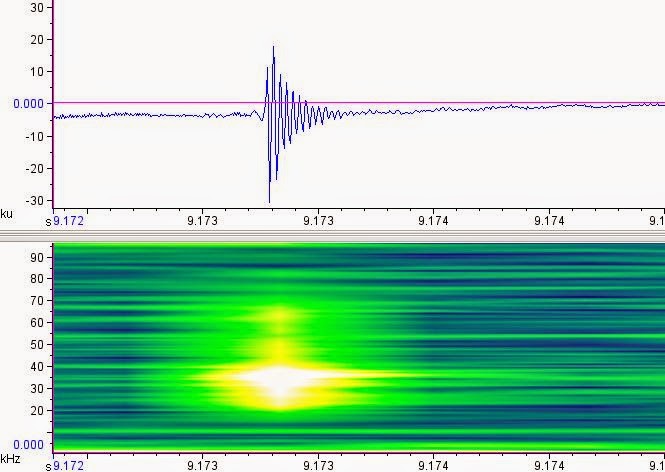 It is thanks to the generosity and expertise of our colleagues in Ocean Science Services of the Marine Institute; the National University of Ireland, Galway; P&O Maritime and of course the officers and crew of the R.V. Celtic Explorer, that we are able to conduct such innovative deep sea acoustic research during this cruise.